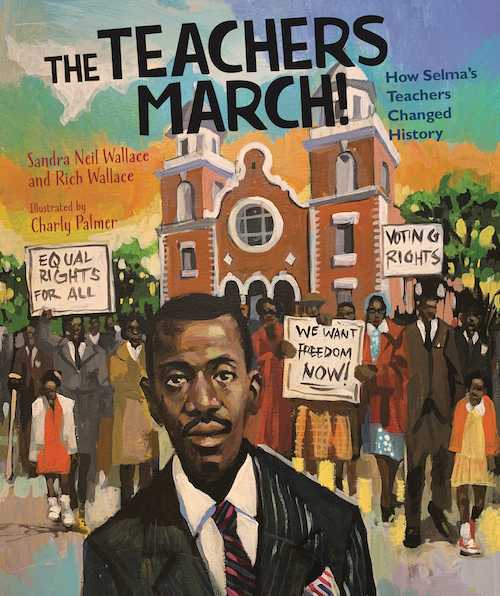 Reverend F.D. Reese was a leader of the Voting Rights Movement in Selma, Alabama, but he needed a “triumphant idea” to ignite the campaign. As a teacher he recognized that his colleagues were viewed with great respect in the city. Could he convince them to risk their jobs, and perhaps their lives, by organizing a teachers’ march to the county courthouse to demand their right to vote? On January 22, 1965, 105 African-American teachers did just that, with Reverend Reese leading the way. In this extraordinary true story of bravery and perseverance, the authors highlight the critical moment when the teachers took action and gave thousands more the courage to march, leading to the passing of the Voting Rights Act of 1965. As part of their research, the Wallaces interviewed teachers and students involved in this little-known, pivotal civil rights event and conducted the last interviews with Reverend Reese before his recent death.

STUNNINGLY POWERFUL … The Wallaces pack their account with well-researched details so that readers get to know Reverend Reese and others as people as well as activists, and Palmer’s vibrant acrylic paintings intensify the urgency of the moment ... The marching teachers inspired other groups—beauticians, barbers, undertakers—to organize, but most significantly, they inspired students to participate. A timely testament to the power of collectivism and the continued need for widespread civic engagement.

A MASTERFUL job of detailing the impetus for the teachers march … Palmer’s brushy paintings are full of color, detail, and emotion. The narrative is well paced and will work brilliantly as a read-aloud for patient, older preschoolers and early elementary–age children, and it should spark many a conversation about race and protest. An alarmingly relevant book that mirrors current events.

VIVID NONFICTION … the Wallaces eloquently portray the vitality of the group effort as well as the high risk involved in participating in the initial and subsequent Selma marches. Abstract, multilayered acrylic paintings by Palmer ground readers in the action … This well-researched picture book proves riveting in its telling of how everyday heroes led a fight that resulted in the Voting Rights Act.